Our Director and Artist

Today, on this auspicious occasion of the first day of Tibetan new year “Losar”, the year of the Iron Rat, a prosperous year filled with growth, I would like to make the announcement of my monkhood ordination.
Tashi Norbu as a Monk
a Lhabri
An Artist
A Founder of the Museum of Contemporary Tibetan Art 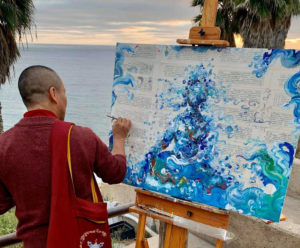 I was ordained with the name “Tashi Norbu” by Namkhai Nyingpo Rinpoche who is considered to belong to the legendary sacred Sky Dancers of Tibet”. I was inspired by Rinpoche, in my whole life, thus I paint the Sky Dancers or the Flying Monks and Nuns. These are my “Time Travelers” depicted on my paintings. I was ordained as a Thangka Painter, by the previous reincarnation of Bokar Rinpoche. 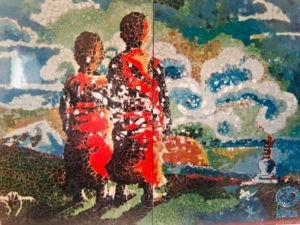 Tashi was the eldest son of the family and he had to accompany his two brothers at their age of 8 into the monastic life in Tibetan Monasteries in India. Mural 1,50 x 2,70 cm[/caption]

My intuition told me, that one day later in the years I would become a monk, engaging myself into the path taught by the Buddha, meditating and putting his words into practice. As the eldest son of the family, but also being familiar with this idea, I had to accompany my two younger brothers at their age of 8, into monastic life in Tibetan Monasteries of India”. Tashi’s life from 4 years, until his 18, was spent in a Tibetan School in India and Bhutan, where he was ordained as a Buddhist practitioner being intensively taught Buddha’s doctrines and philosophy besides his general educational school studies. From 19 to 21 years of age, he was studying at Monastic environments, such as Sherabling, the residence of the 11th Tai Situ Rinpoche, Founder of the 17th Karmapa who was recognized by HH Dalai Lama. Tashi had wonderful conversations with Tai Situ Riponche regarding Art, as Riponche was also a Painter, yet he issued a book over his contemporary Art. 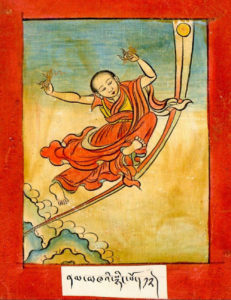 “I was inspired by Rinpoche, in my whole life, thus I paint the Sky Dancers or the Flying Monks and Nuns. These are my “Time Travelers” depicted on my paintings. I was ordained as a Thangka Painter, by the previous reincarnation of Bokar Rinpoche”. Tashi says.[/caption] 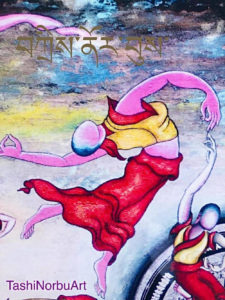 Until his 25 years of age Tashi followed Buddhist dialectics in Dharamsala. He was also painting along with other Tibetan Thangha Painters in the Monastery Tai Situ Rinpoche dedicated until now, to the Art of painting Buddhas and Bodhisattvas. At the monastery during his two years, he had the great chance to experience and share monastic life with monks, teaching them English at the same time.

The famous “Time Travelers” are Artist’s monks flying into the sky beyond time and space.
(Mural 4,50 x 1,50cm)

He has also worked as a Thangka Painter under HH 14th Dalai Lama’s private office. Tashi recalls his mother’s family story that his grandpa, was going once a week into trans and into another dimension, in order to serve those beings who were lost in “Bardo”; He was always telling Tashi “one day you will be a Lhabri” (he who paints gods). 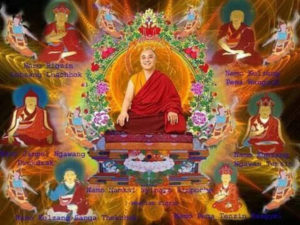 Photo above. Tashi was ordained with the name “Tashi Norbu” by Namkhai Nyingpo Rinpoche[/caption]

Tashi’s monastic kind of life, ended at his 25 when he came to the West; where he became a contemporary Tibetan Artist. Although he blends the traditional with the modern, his paintings still teach enlightenment and the path to Buddha hood . They are filled with magical tales, colorful imagery, presenting valuable insight into the living quality of Tibetan Buddhism . Tashi has been fascinated by making recitations, being so creative at his “Tibetan Mantra Lounge” something which, according to tradition, is not allowed to be performed by a non monk. But Tashi did perform it, meditating along with his audience, viewers and Art lovers, finding in this way the calmness of their inner self. And he travels to the four continents, reciting Tibetan mantras and giving live painting performances.

Tashi Norbu was ordained by Tulku Yeshi Rinpoche and he obtained the name Karma Choeying Tashi. 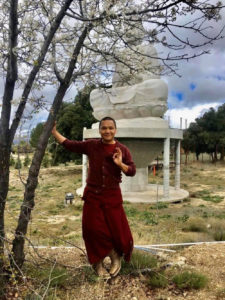 Having tasted all aspects of life, Tashi is now conscious of his decision, to dedicate himself in the monkhood, being engaged in Buddhism, yet transmitting to the world his artistic activities: painting Buddhas and Bodhisattvas, giving live painting performances, Mandala festivals, Tibetan Mantra Lounges, workshops on how to make a Buddha, benefiting all sentient beings through the purpose of art as a communication means within the higher realms. Marking at the same time the unique ethnic cultural Tibetan Art and confirming the dominant tropes of Tibetan Buddhism in the West, where the practice in Buddhism is part of Tibet’s cultural heritage and asset. 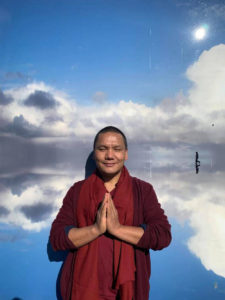 Photo above. Tashi in front of a photo, part of the photographic exhibition happening in Rensenpark, Emmen.

Tashi has now become a Tibetan Buddhist Monk due to his strong belief that this is a unique way to walk on this path as an Artist along with all, he is willing to offer through his Art; in order to deepen people’s understanding and help them realize their merits and virtues. For, his paintings touch the mind, the soul, the consciousness. He talks about his depictions to the world and explains his Artworks with reference to the Buddha’s teachings and theories. Determined to live a life entirely devoted to the goal to help all sentient beings to overcome their sufferings that inherently exist inside them and cope with their general insecurity of all conditioned phenomena. 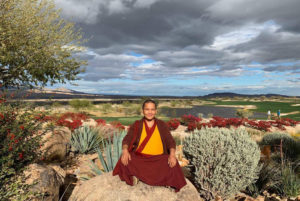 In Borrego Springs, amongst wild flowers[/caption]

A life that carries a deep responsibility of self and others and lots of sacrifices in order to become a Buddha and get enlightened. A meaningful and worthwhile way for Tashi to spend his life being of benefit to his environment and talk about the preservation of the Tibetan Art and Culture into the world. Hence, the Museum of Contemporary Tibetan Art, in Emmen, The Netherlands. A place where West meets East; where his Live Painting Performances along with Tibetan mantra lounges empower his paintings and transform them into a true embodiment of the Buddhas and Bodhisattvas; where the traditions, rituals, philosophical view draw inspirations; and here is when Artist’s mind clicks, devoted to compassion and endless services to others.

Riponche has received teachings from over forty masters and he has authored fifteen books on subjects of Tibetan Buddhism and culture. He is a Chod Master, Shamanistic healer, Artist and Astrologer as well as being the founder of Heruka Institute and author of 13 books, he crossed the Himalayas from Tibet to India on foot in 1994. He moved to Seattle in 2002 and has taught Buddhism and Tibetan culture around the world since then. His gripping autobiography, A Modern Liberation Odyssey, Handbook for Half-Buddhas and Tibetan Zen are available.

Tashi has also been ordained by a Female Vulnerable nun of Tibetan Buddhism who is in a Dharamsala Monastery and advises and supports him too in his path. The vulnerable Tibetan nun wants to remain anonymous. Tashi says that he specifically asked to be ordained by a nun, as in his life, has been very much supported by females, in the forms of motherly, sisters or dear ones. Further more he supports the equalities and rights of women in Tibet and monastic world, concepts, that we still are lacking behind; however, lately HH Dalai Lama had noticed this difference and for first time it was HH who gave the rights for nuns to receive Gheshe (PHD) degree. In this way female (nun) masters are given equal rights to teach and attain the similar seats in the Tibetan Buddhist Schools.

no thanks, next time.